Which Tulips would you plant this year?

Which Tulips would you plant this year?

The Tulip flower is one of the world’s most popular (bulb) flowers. You can plant the bulbs in your garden, buy a bunch of cut flower Tulips for in your vase at home, or even buy Tulip bulbs planted in a pot at your garden center. In your garden, they will  flower after winter, in spring.  As a cut flower, you can buy them usually from December until May, because the flower growers have their ways to make the bulbs flower much earlier in their greenhouses.

The secret to let Tulip bulbs bloom in spring in your garden, but also in the growers greenhouses, is to allow them minimum 14 – 16 weeks at low temperatures (below 9°C/48° F).
If the bulbs remain at these low temperatures, so actually in winter-like conditions, the white roots start to grow and the flower bud inside the bulb will gradually develop and in spring, the bulb then is ready to grow above ground and will flower within a few weeks. All parts of the plants that develop above ground, have already been developed on a micro level inside the bulb!
The reason that the Tulip bulb grows like this, is that in natural conditions, in its native countries in Central Asia such as Kazakhstan, Afghanistan, etc., the bulb protects itself in cold winter conditions by staying under ground and when it becomes warmer in spring, they start growing and flowering when temperatures are rising in the mostly mountainous areas.

All of the above is the reason that Tulip bulbs can’t be planted in (sub)tropical climates, just because it doesn’t become cold enough in these regions!

Although, there is a solution if you live in these warmer climates and you are really in love with Tulips ,then do like the professional Tulip cut flower grower does: Plant them in a pot or planter in soil in the fall (October-November),water the pots and put them in cold storage ( 7-9 C/ 44-48 F).

At the end of this simulated ‘winter’ in February (or after 3,5-4 months in the Southern hemisphere), you can take them out of cold storage and put them in a spot which is not too warm for the bulbs and they will start growing and flowering before the hot season starts! 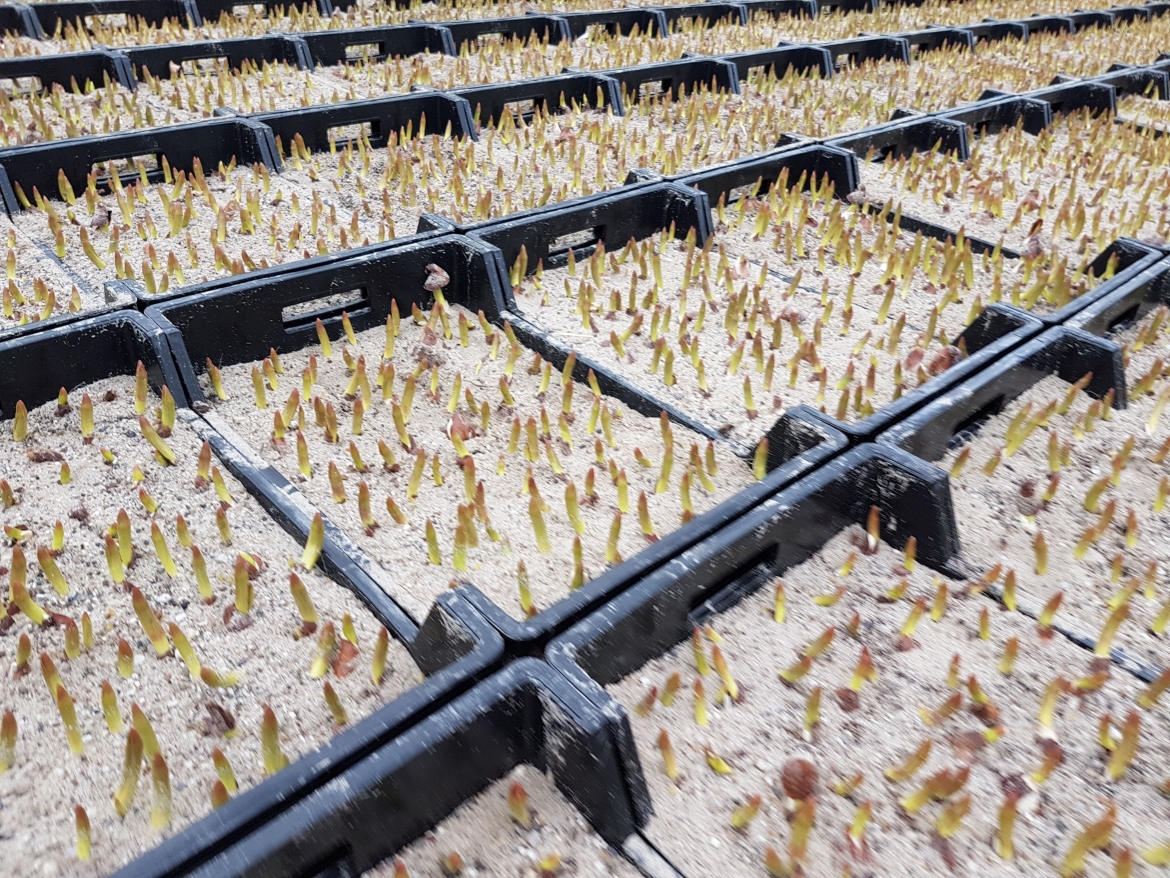 When you ask most people what a Tulip looks like, they will describe the archetypical Tulip like in pict.2 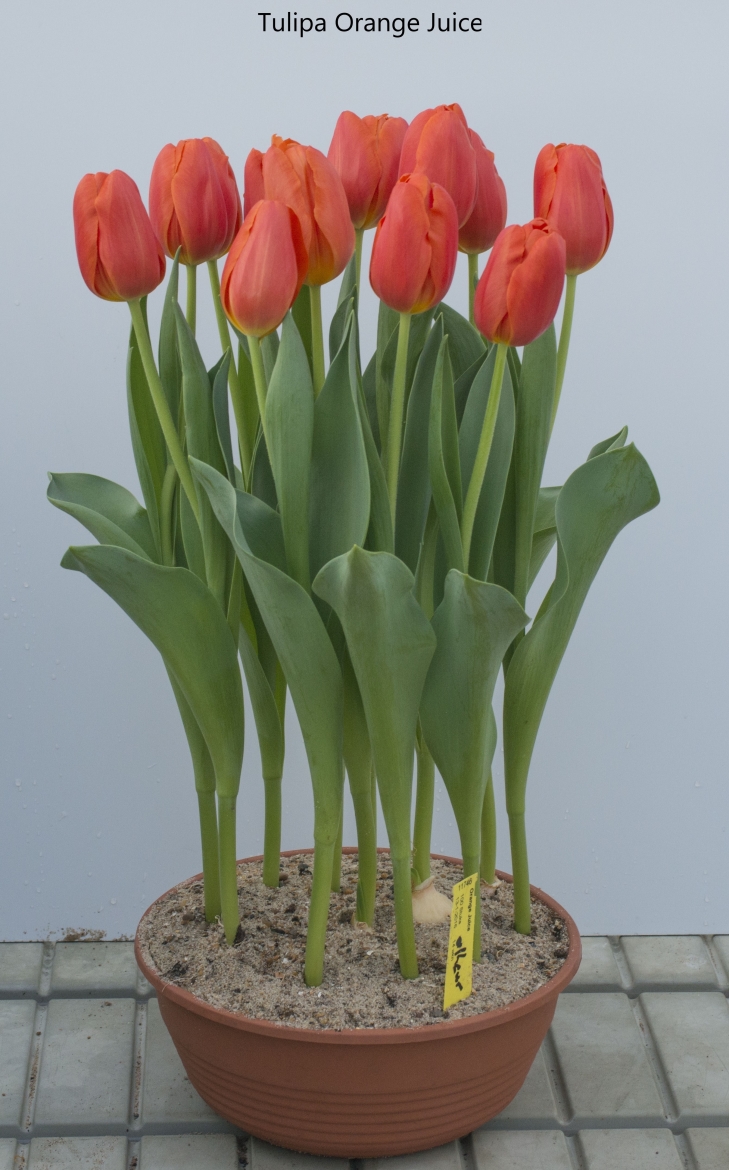 By crossing 2 varieties, a number of seeds will be produced by the mother plant, which seeds can be sown and after germination the seedlings will start to grow their tiny bulbs.

Like a normal Tulip bulb does, the foliage will only grow for 2-3 months and die off again until the next year. The first few years, the foliage of the juvenile bulbs looks more like grass than like typical adult Tulip leaves (pict.3)! 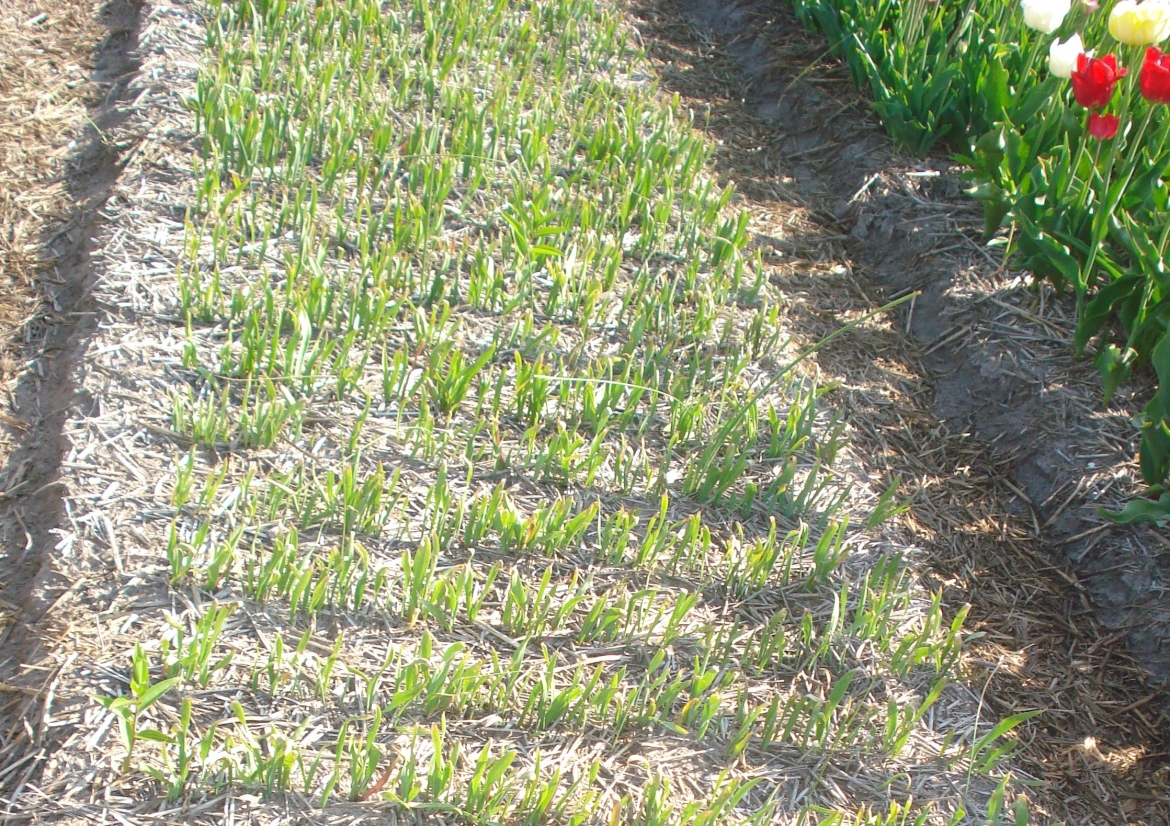 Only after 5-6 years, the first flower will show and each seedling will be different of shape and color (pict.4).
The task of the hybridizer will be, to recognize the best plants. From now on ,these selected new bulbs/plants will not be propagated by seeds , but by cloning, so this means that once a year, 1 adult bulb will produce after flowering, 2-3 new bulbs every spring/summer and they will be genetically identical to the first newly found bulb. You can easily imagine that it takes 15-20 years, before a new variety can be introduced to the professional market! 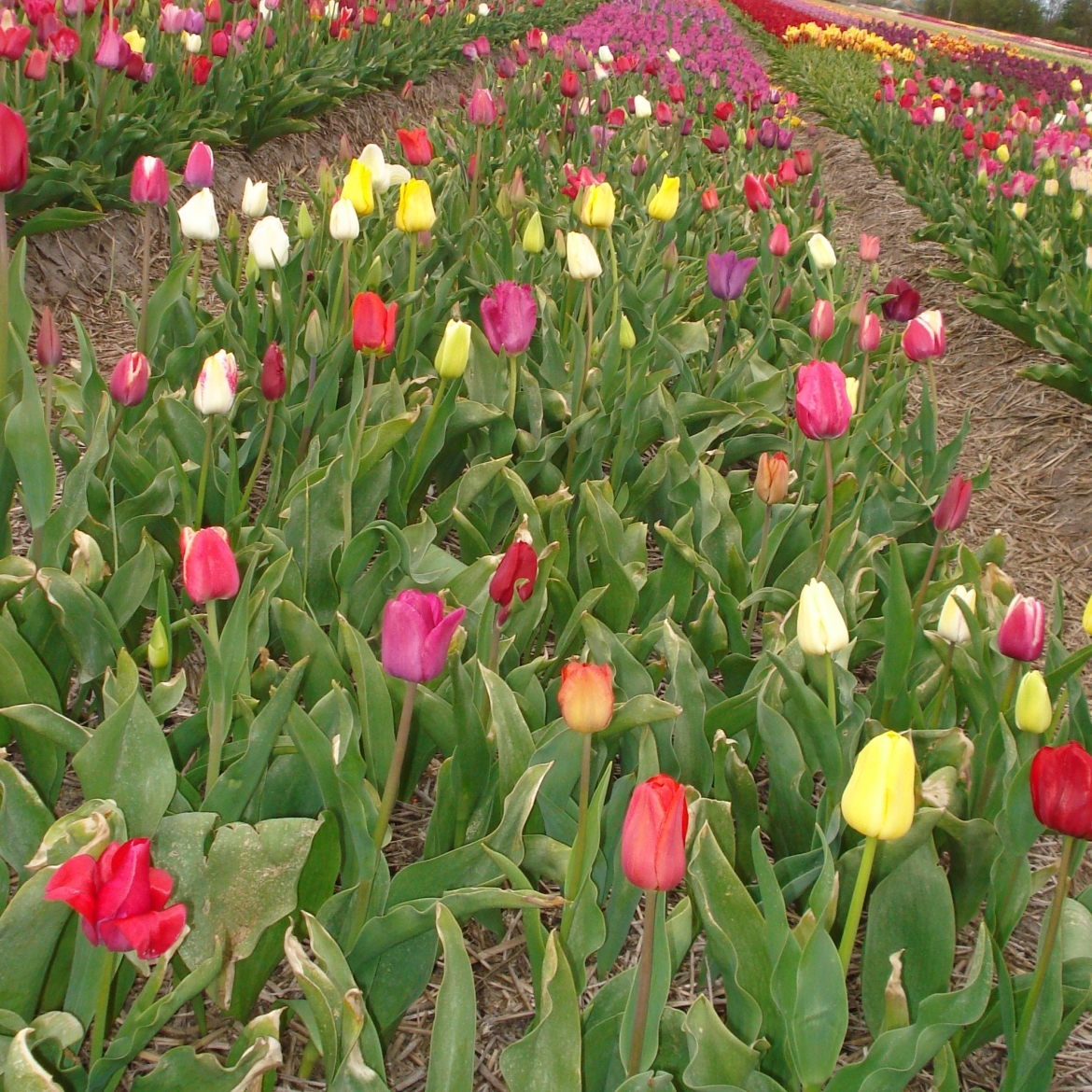 Pict.4: Tulip seedlings flowering for the first time after 5-6 years. Each plant is unique.

Unlike other crops, Tulips can’t be propagated faster in a laboratory by means of tissue culture, at this time of writing (2020)!

So when you buy your Tulip bulbs , the variety might already be 20 or 30+ years old, since it was selected! The bulbs of one variety , are all ‘copies’ of the first original bulb!

In the meantime, while testing all these new potential clonal varieties, the hybridizer/grower will find out if a new variety will become a garden Tulip or perhaps a future cut flower Tulip, so not all new tulip varieties will have an identical future!

In Holland (the Netherlands), which is the center of the world for developing new Tulip varieties, there are several companies which are specialized in hybridizing Tulips and sometimes they hybridize other bulbs as well, like Hyacinths, Daffodils, etc.

To prove that not all Tulips look alike, we’ve compiled an overview with photos, to show the different groups.

Tulips can be categorized in the following groups: 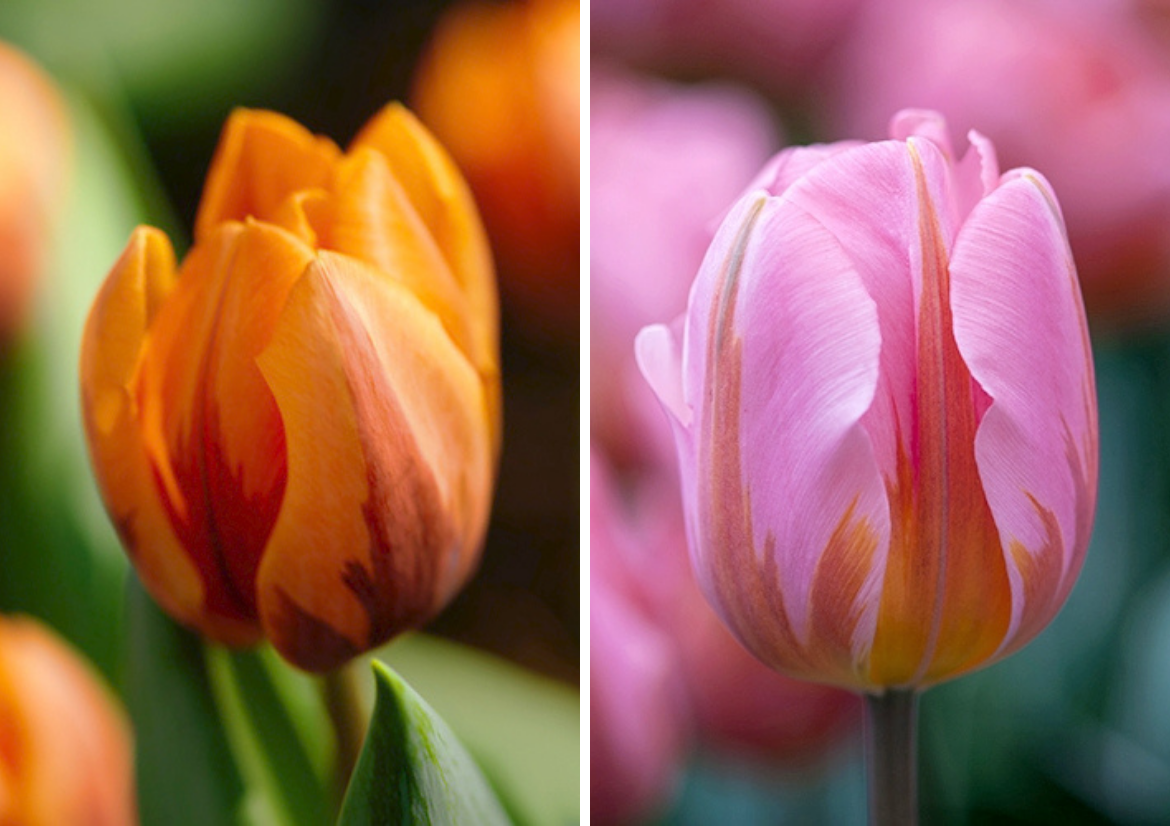 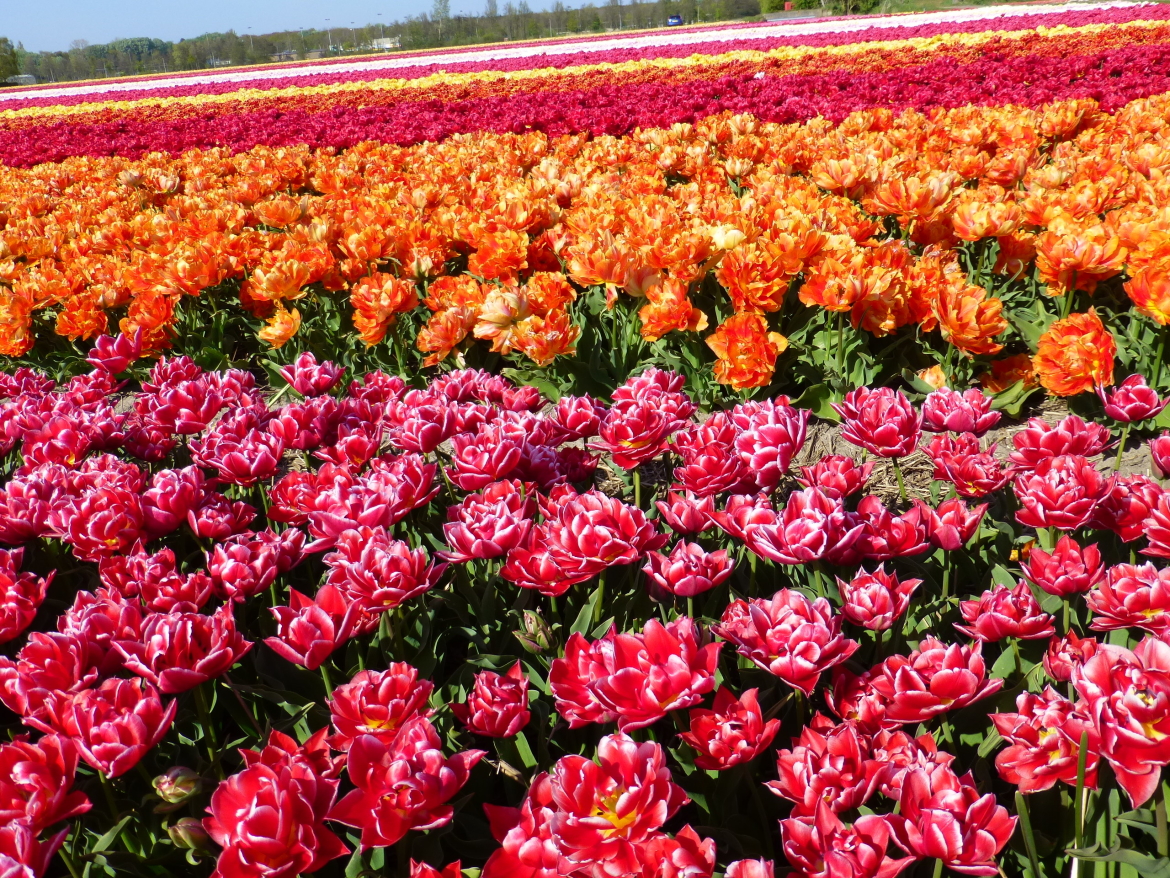 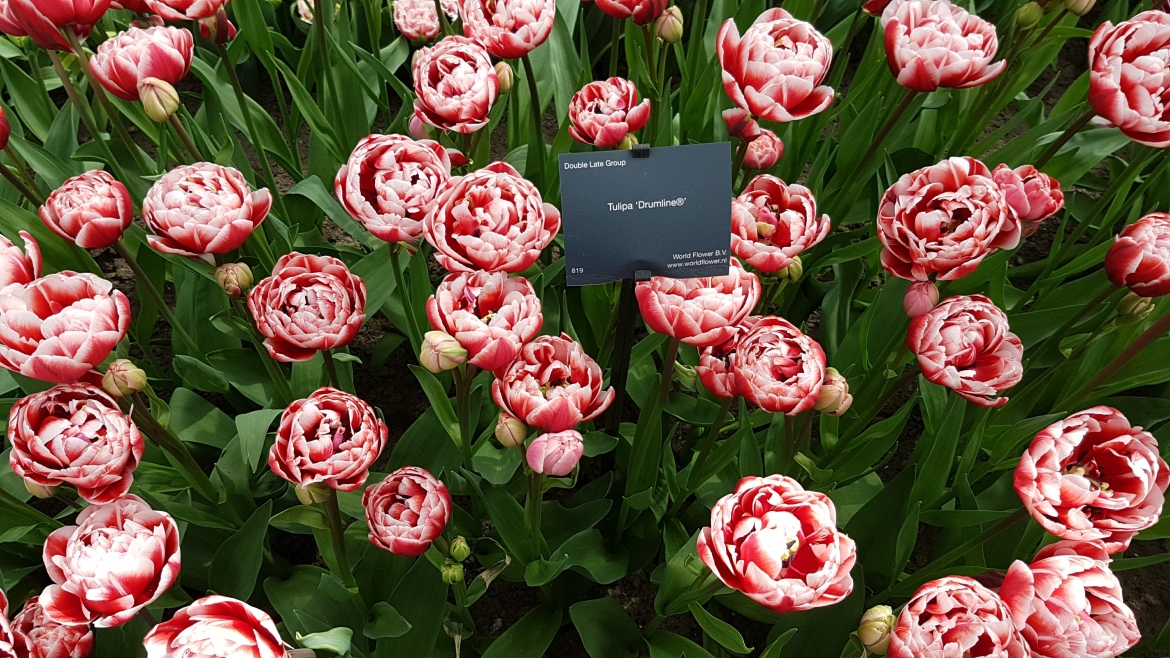 -Triumph Tulips: This group of Tulips blooms quite early with a wide range of colors. Varieties with medium-long stem length. Many good cut flower Tulips in this group. 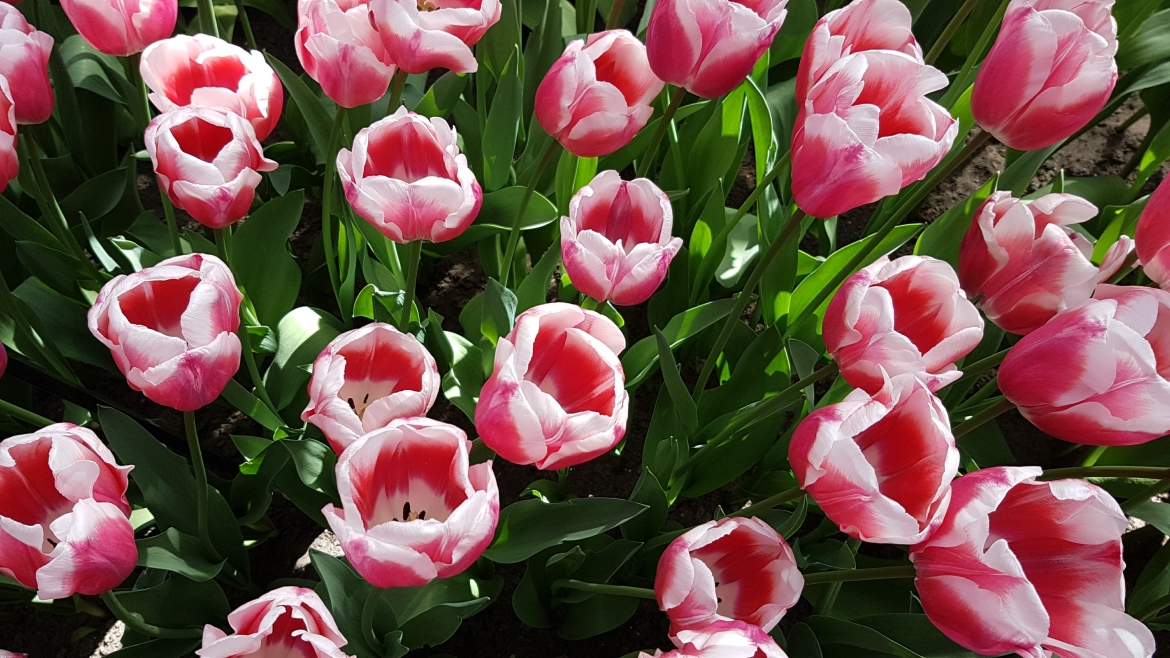 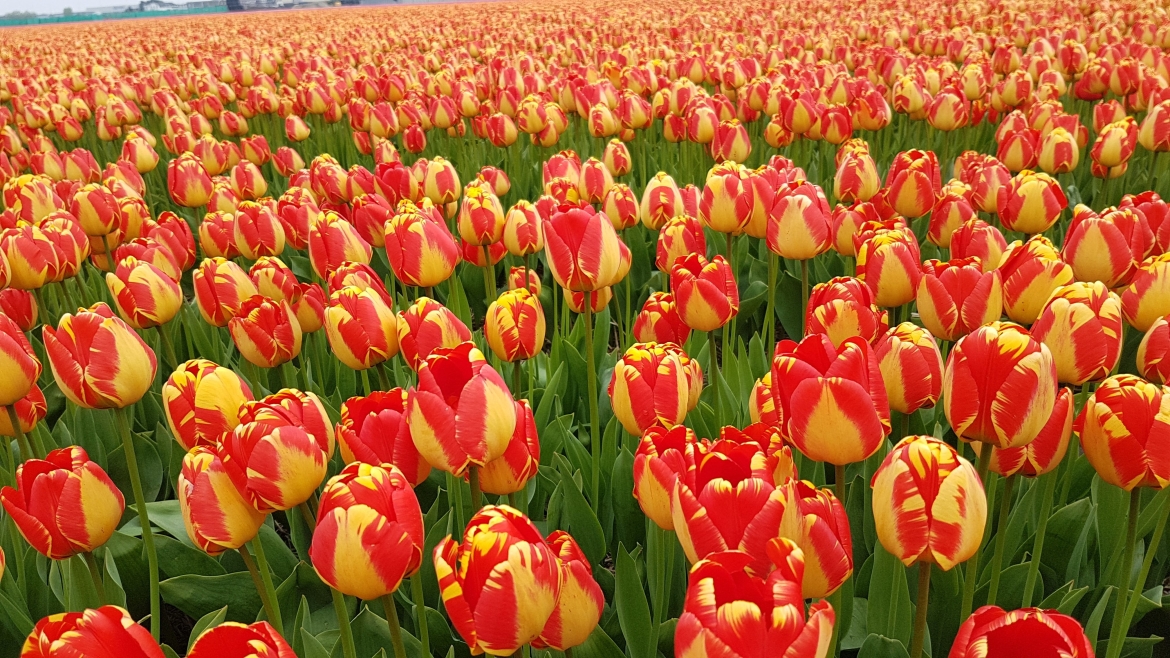 -Viridiflora Tulips: Single late flowering thin flower with green petals on the outside. Hardy flowers. They come in a limited number of varieties, recently developed. 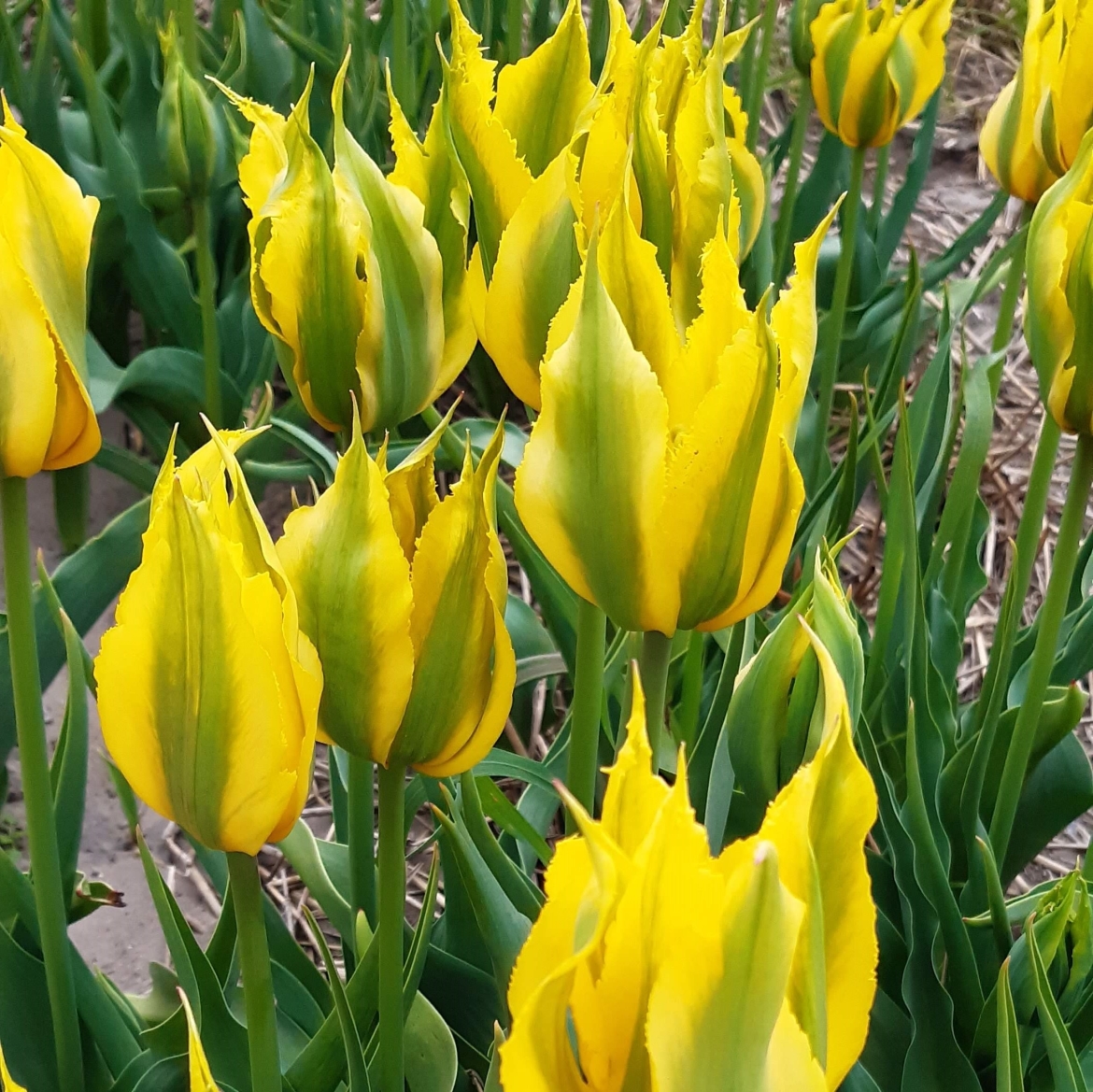 -Parrot Tulips: What’s in a name……. The single or double flowers really look like a parrot! The stems are very often not strong enough, to support the weight of the flower, so usually they bend down after the flower opens. Of course the value of the flower is the extraordinary shape and color combination!

-Rembrandt Tulips: Typical bi-colored flowers that seem to have a flame of 2 or 3 different colors .The name originates from the 1600’s ,when rich investors paid fortunes for Tulip varieties with this color combination. After the microscope was invented, the researchers found out, that this was caused by a virus, which is transmitted by insects from one  plant to another. So way back, they actually paid fortunes for infected plants!
But this is not the case with the modern ‘Rembrandt’ varieties, so you can order  them without any doubts! 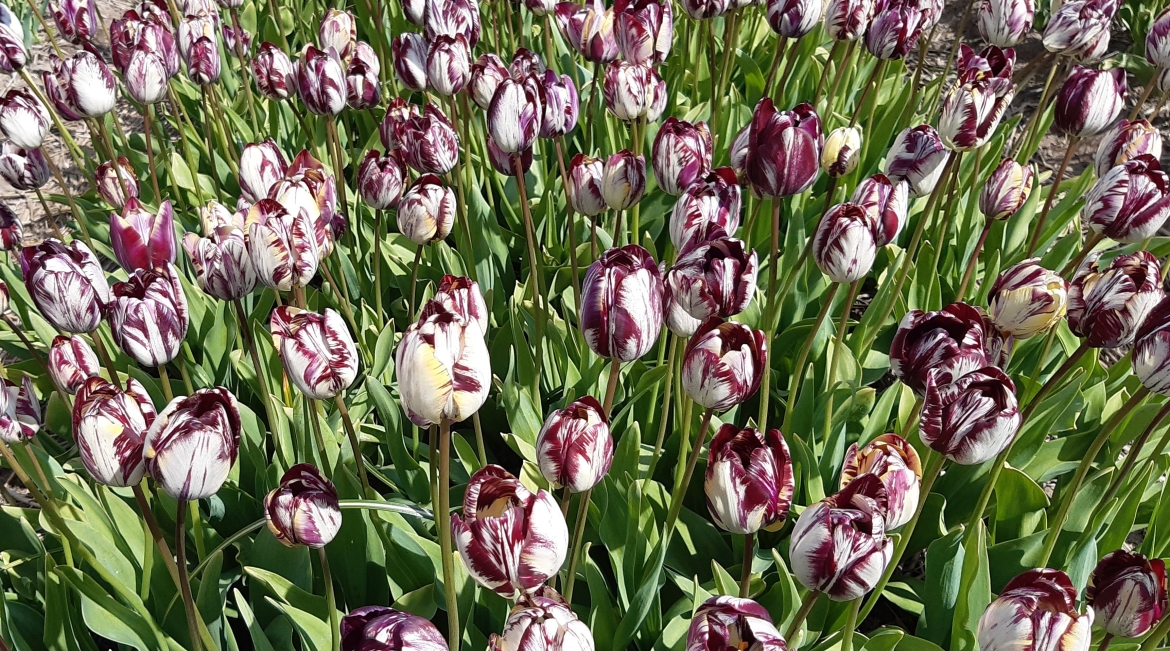 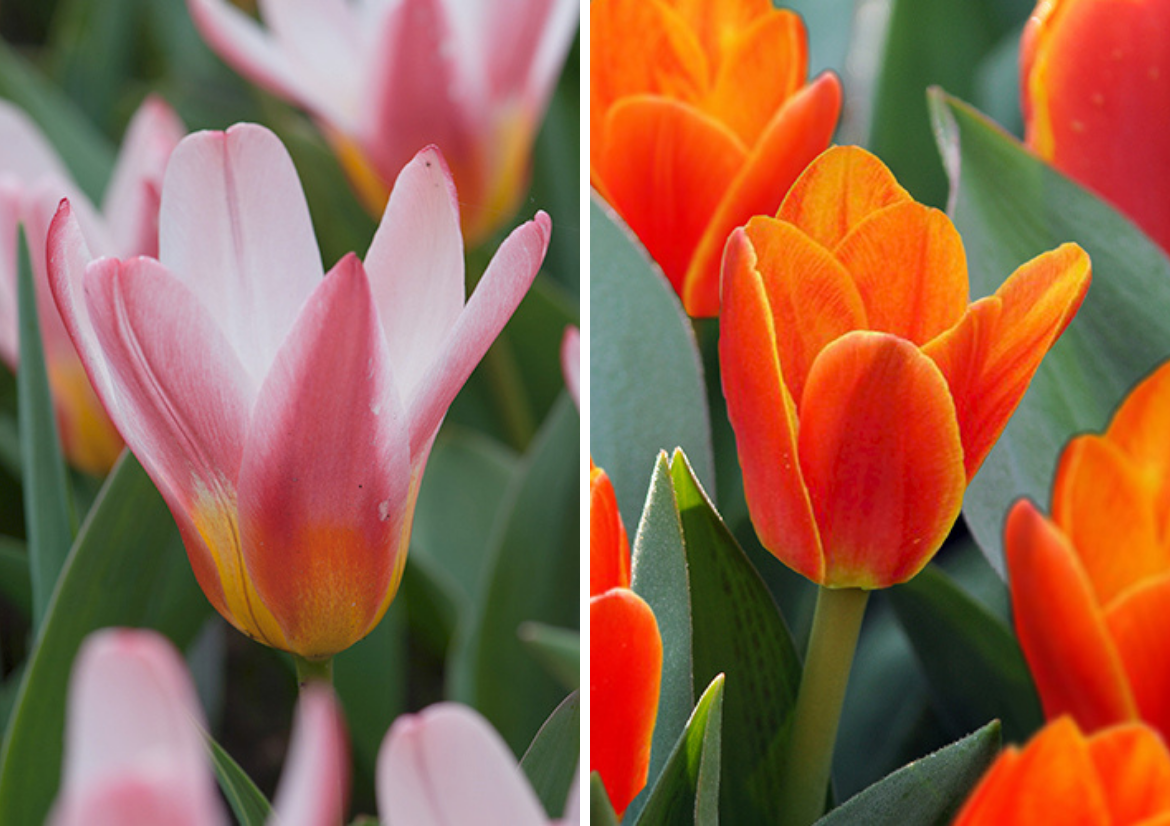 -Greigi Tulips: Short, early flowering Tulips with typical brown striping in the leaves, because the botanical Tulipa Greigi was used as a parent to create this group of Tulips, which can be planted in pots, planters and flower borders. 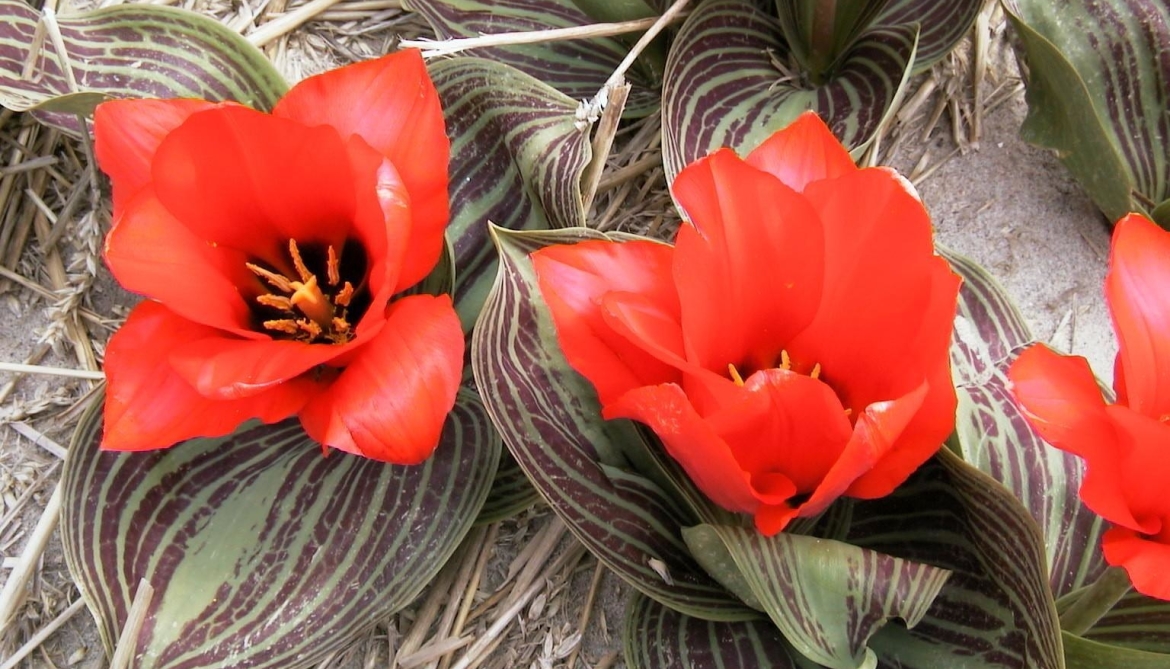 -Fosteriana Tulips: Mid-season flowering Tulips for use in garden borders with short to medium sized stems and in general, smaller flowers. –Multiflora Tulips: Small – medium sized Tulips that develop several flower buds on one stem, so when all flowers have opened, you can expect a sea of flowers in your garden. Late flowering/end of April-May. -Botanical Tulips: Small flowering Tulips with relatively short stems which flower in general quite early in spring. These are one of the few Tulips that are suitable for naturalizing in your garden, this means they can stay in the ground after flowering and you don’t need to dig them up, like most Tulip bulbs, every year. These Tulips are indigenous in Asia in general. The indigenous Tulips very often have been crossed with modern Tulip varieties, but they still very much look like the original native Tulips. 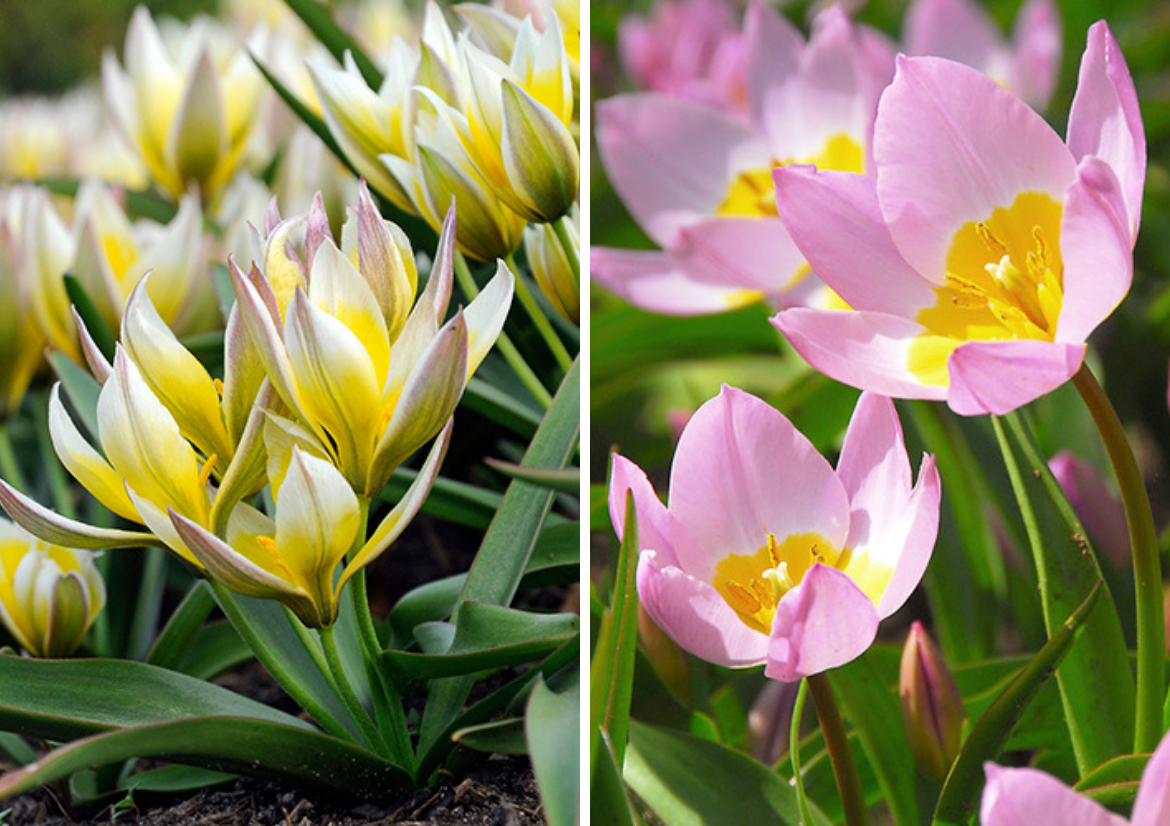 Cross-over Tulips: These Tulips have characteristics of 2 or 3 of the above mentioned varieties e.g., they might be double flowering but fringed as well, etc.

We hope that the next time, when you take a look at your Tulips ,you will wonder how much time, effort and knowledge went into  the process of creating this magnificent bulb flower!

Enjoy your Tulips next spring!

Discover the world of Orchids in Holland
21 januari 2022